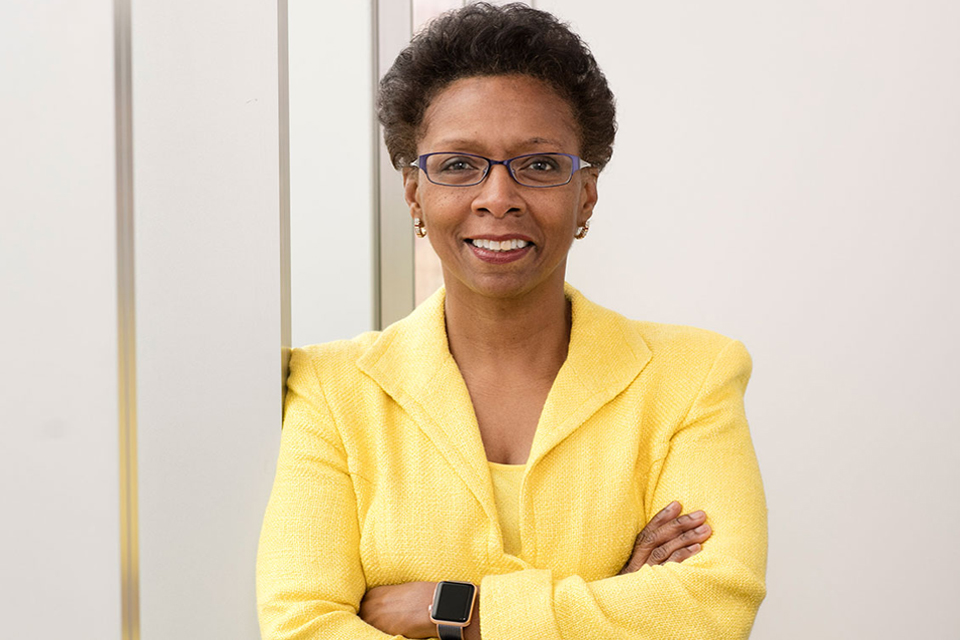 On Sept. 11, faculty, staff, students, alumni, and officials from across the University of Maryland, Baltimore gathered in Pharmacy Hall to listen as Natalie D. Eddington, PhD, FCP, FAAPS, dean and professor of the University of Maryland School of Pharmacy, delivered her State of the School of Pharmacy Address. The address, which Eddington also presented at the Universities at Shady Grove on Sept. 6, highlighted the School’s recent accomplishments and advancements in its strategic plan areas of pharmacy education, research, practice, community engagement, and pharmapreneurship.

“Great institutions are committed to their strategic plans, and the School of Pharmacy is no exception,” said Eddington. “The latest iteration of our five-year strategic plan was implemented in 2016 and sets forth lofty goals to achieve before its conclusion in 2021. This year’s State of the School of Pharmacy Address provides an opportunity for us to reflect on those goals that we have already realized, while offering a glimpse into the future at new initiatives on which we will embark in the years to come.”

Eddington began her address with a recap of the School’s recent 175th anniversary celebration, which commenced in January 2016 and featured a number of events attended by faculty, staff, students, alumni, and friends of the School. The 18-month celebration not only reflected the School’s history, but also highlighted its ambitions for the future, culminating in a once-in-a-lifetime event that honored nine of the School’s most extraordinary alumni as its Founding Pharmapreneurs and heralded the next era of innovation at the School – an era of pharmapreneurism.

“Our goal is to emulate and follow the example set by our nine founding pharmapreneurs, and offer our faculty, students, and staff every opportunity to be innovators of their own,” said Eddington. “Following their lead, the School will move in a direction in the years to come that no other pharmacy school in the country has conceived of – the creation of programs and initiatives focused on pharmapreneurism.”

Speaking about the School’s leadership in the area of education, Eddington explained that the Doctor of Pharmacy (PharmD) program remains the largest academic program at the School, receiving an average of 1,000 applications for each class of 160 students. In addition, she noted that the School’s two doctoral programs – the PhD in Pharmaceutical Health Services Research (PHSR) and the PhD in Pharmaceutical Sciences (PSC) – continue to attract the best and brightest students, commending the PhD in PSC program’s participation in the Meyerhoff Graduate Fellowship Program at the University of Maryland, Baltimore County, which aims to increase diversity among students pursuing doctoral degrees in biomedical and behavioral sciences. Eight graduate students currently enrolled in the program are Meyerhoff fellows.

Showcasing the expansion of the School’s academic catalog, Eddington highlighted its three online master’s degree programs – the MS in Regulatory Science, MS in Pharmacometrics, and MS in Palliative Care. Led by Mary Lynn McPherson, PharmD, MA, MDE, BCPS, CPE, professor in the Department of Pharmacy Practice (PPS) and executive director for advanced post-graduate education in palliative care at the School, the MS in Palliative Care launched in Spring 2017, and has already enrolled 80 students, including 14 physicians, 25 nurses, 11 pharmacists, six social workers, and two veterinarians. “The diverse careers held by students in the MS in Palliative Care program illustrate the truly interprofessional nature of this field and further support the demand for advanced knowledge in the field,” she said.

Shifting the focus to research, Eddington spotlighted the School’s integrative approach to drug discovery and development, innovative patient care, and medication outcomes and their economic impact. She reported that faculty, postdoctoral fellows, pharmacy residents, and graduate students at the School were awarded more than $28.1 million in grants and contracts during the 2017 fiscal year – a five percent increase when compared to the 2016 fiscal year.

In addition to highlighting several faculty members who recently received or renewed multimillion dollar grants with leading funding agencies, such as the NIH and National Science Foundation, Eddington presented a number of pioneering research initiatives in which the School is currently involved, including its participation in the National Institute for Innovation in Manufacturing Biopharmaceuticals (NIIMBL) and a new partnership with the University of California, San Francisco to accelerate the pace of innovation in pediatric drug and device development.

She also explained how interdisciplinary efforts spanning the School’s three departments are helping to combat drug addiction across the nation – including efforts by researchers in PSC to develop a new opioid compound with no abuse liability, ongoing work by faculty in PPS to establish criteria for analyzing data from the state’s Prescription Drug Monitoring Program to help identify potentially harmful drug interactions and inappropriate prescribing, and initiatives led by researchers in PHSR to help shape both state and federal policy surrounding prescription drug abuse and medication quality in long-term care and in mental health.

“Nowhere is our focus as a comprehensive school of pharmacy more evident than in our approach to addiction,” she said. “This impressive body of work encompassing our education, research, practice, and community mission areas focuses on one of our nation’s top public health crises and demonstrates our commitment to playing a major role in curbing the dangerous trends of opioid addiction.”

In the area of practice, Eddington reported that faculty in PPS provided care for nearly 23,000 patients across the state of Maryland in a variety of settings, including outpatient clinics, hospital units, and community pharmacies. She spotlighted the recent launch of the Applied Therapeutics, Research, and Instruction at the University of Maryland (ATRIUM) Cardiology Collaborative and congratulated Magaly Rodriguez de Bittner, PharmD, BCPS, FAPhA, professor in PPS and associate dean for clinical services and practice transformation, on being named the inaugural population health fellow with the University of Maryland Medical System, which helped to pave the path for the School to partner with the medical system through a contract with its Quality Care Network to provide pharmacy services and case management support to approximately 125,000 patients.

Underscoring the School’s commitment to engaging with the local community, Eddington spoke about how members of the Patient-Centered Involvement in Evaluating the Effectiveness of Treatments (PATIENTS) program, which empowers patients to ask questions about their health care concerns and actively participate in studies to answer those questions, hosted or participated in 350 community events throughout West Baltimore, reaching 1,500 patients and community members. She also applauded the work of the School’s numerous student organizations, which organized more than 70 events for members of the greater Baltimore community combined, noting that several of those initiatives were part of national campaigns, including the National Script Your Future Challenge, or recognized with national awards, such as the School’s American Association of Pharmaceutical Scientists student chapter receiving the organization’s 2016 Student Chapter of the Year Award.

Major charitable giving events were also spotlighted during the presentation, including the success of the School’s first-ever online Giving Day and the creation of new scholarships as a result of endowments made by the family of Felix A. Khin-Maung-Gyi, BSP ’83, PharmD, MBA, who founded and served as chair of Chesapeake Research Review before his death in 2014, and Ellen H. Yankellow, BSP ’73, PharmD ’96, president and chief executive officer of Correct Rx Pharmacy Services.

To conclude her address, Eddington offered a look into the future at the School of Pharmacy – a future made even brighter with the recent launch of its new initiative in pharmapreneurism.

“As we move into our next 175 years, the School of Pharmacy remains committed to providing our faculty, students, and staff with the tools and resources they need to solve the perennial, long-term problems facing health care, research, and society,” said Eddington. “Exclusive to the School of Pharmacy, pharmapreneurism formalizes this commitment, allowing us to focus on building innovative pharmapreneurial programs that can be incorporated into every facet of the School.” 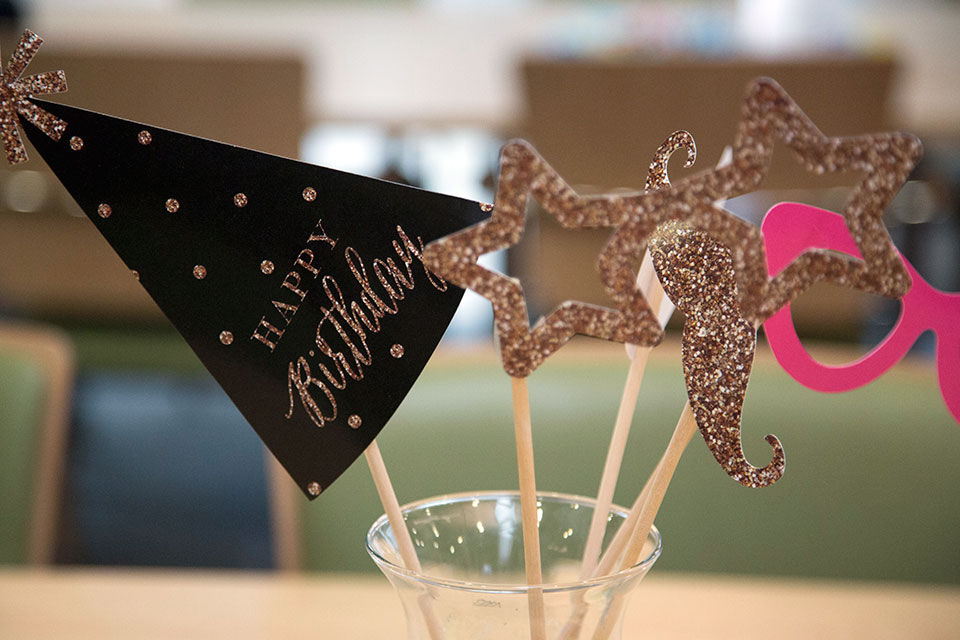 More than 100 faculty, staff, students, alumni, and guests gather in Pharmacy Hall to kick-off the School’s anniversary with a grand birthday celebration. 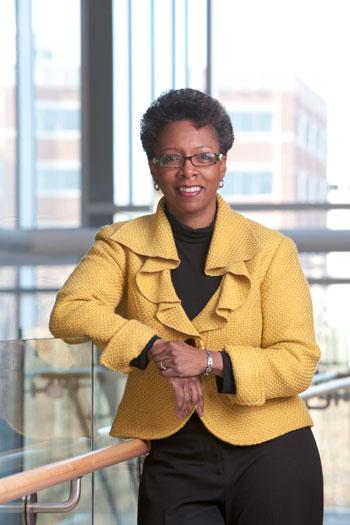 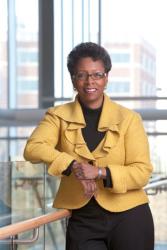