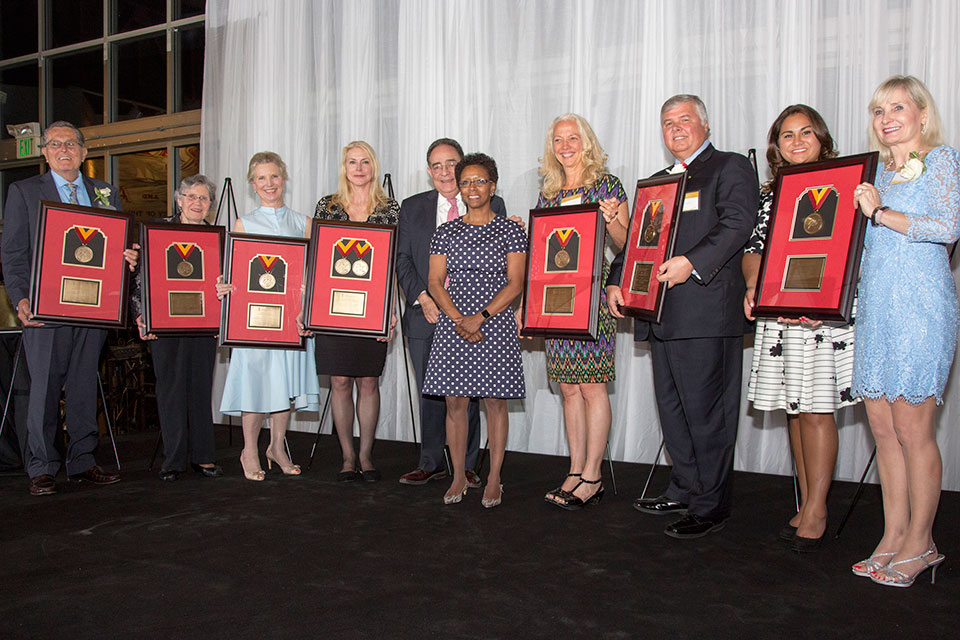 The University of Maryland School of Pharmacy concluded the celebration of its 175th anniversary on May 10 with an evening gala at the Baltimore Museum of Industry that celebrated nine of its most extraordinary alumni and heralded the next era of innovation at the School – an era of pharmapreneurism.

Derived from the French term entrepreneurism and trademarked by the School of Pharmacy, pharmapreneurism describes the School’s commitment to supporting and best positioning both faculty and students to achieve their career aspirations and address the nation’s health care, research, policy, and societal needs.

“In 1865, words like ‘innovation’ and ‘entrepreneur’ were not the buzzwords that they are today,” said Natalie D. Eddington, PhD, FCP, FAAPS, dean and professor of the School of Pharmacy, as she delivered opening remarks during the event. “Yet, when 10 men met that year to reorganize and reopen the Maryland College of Pharmacy – first established in 1841 – the move exemplified all that is meant by entrepreneurism. That same spirit of innovation exists in each of tonight’s honorees. The nine alumni being honored tonight stand out as true pillars of excellence among our thousands of graduates and serve as models for our faculty, students, and staff in our constant pursuit to be the preeminent home of pharmacy entrepreneurism – pharmapreneurism.”

The nine distinguished alumni honored during the gala were individuals who have been recognized nationally for their entrepreneurial vision and transformational accomplishments. The School presented each of them with Founding Pharmapreneur Awards of Service and Excellence to commemorate their work as unparalleled leaders and innovative examples of successful pharmapreneurism, building upon an earlier luncheon hosted by the School that celebrated 37 outstanding alumni who epitomize expertise, influence, and impact in the School’s mission areas of education, research, practice, and community service.

Felix A. Khin-Maung-Gyi, BSP ’83, PharmD, MBA, was also posthumously honored for his work as chair and founder of Chesapeake Research Review. Before his family accepted the award on his behalf, Eddington announced that Gyi’s family recently donated $750,000 to the School to establish the Felix Gyi Endowed Memorial Scholarship in Pharmapreneurism. The scholarship will provide one full year of tuition for a student in the Doctor of Pharmacy (PharmD) program who has expressed a desire to pursue a non-traditional career path. “This scholarship will forever honor the life and legacy of Dr. Gyi’s extraordinary career, service to his alma mater, and leadership as a School of Pharmacy Founding Pharmapreneur,” she said.

“As I reflect on this evening, it occurs to me that pharmacy has come full circle,” said Yankellow, who was also presented with a commemorative chair from the School to honor her long-time service as a member and former chair of its Board of Visitors. “When I graduated, it was not unusual for pharmacists to become entrepreneurs, but the profession later migrated from one of owners to one of employees. Now, there is once again a shift. I congratulate the School of Pharmacy for embracing this trend and creating a cutting-edge program to encourage creativity through pharmapreneurism, and am extremely grateful and humbled to be honored as one of its Founding Pharmapreneurs.”

“Sharp and Dohme launched their pharmaceutical enterprise during a particularly tumultuous time for science in the nation’s history,” said Sandra Milligan, MD, JD, senior vice president and head of global regulatory affairs and clinical safety at Merck, Sharp & Dohme Corp. “Although they accomplished a remarkable achievement, I often wonder what their pharmapreneurial talent might have allowed them to achieve had they been alive today with the cutting-edge technologies that we now have at our disposal. I am thrilled to accept this award on their behalf, and wish the School of Pharmacy another wonderful 175 years.”

George Avery Bunting, valedictorian of the Class of 1899, founder of Noxzema, CoverGirl Cosmetics, and the Noxell Corporation; and John M. Gregory, BSP ’76, DPS (hon) ’02, chairman and chief executive officer of Gregory Pharmaceutical Holdings, founder of King Pharmaceuticals, and managing partner of SJ Strategic Investments, were also honored alongside Yankellow and Sharp and Dohme.

“I knew my grandfather from the stories that he and my grandmother would share with us, and the more that I learned about him, the more amazed I became,” said Mary Catherine Bunting, the granddaughter of George Avery Bunting, who accepted the Founding Pharmapreneur award on his behalf. “While I don’t know what inspired my grandfather to pursue a career in pharmacy, I do know that he had a lot of business savvy and ‘get up and go,’ which helped him climb from his humble beginnings to become the head of an international corporation. I’m proud to be here to honor him tonight.”

“The School of Pharmacy provided me with a wonderful pharmaceutical background that helped me tremendously in my entrepreneurial career,” said Gregory. “However, one of the lessons that had a tremendous impact on me and that I have tried to model throughout my pharmaceutical career is that when you do something as a group, you should be rewarded as a group. As I accept this honor tonight, I accept it not as an individual, but as a member of the Gregory Family, who was blessed with the privilege of leading my family in our business enterprise.”

The event concluded with a look into the future of pharmapreneurism at the School of Pharmacy.

“In September 1962, President John F. Kennedy famously delivered a speech at Rice University that discussed the nation’s efforts to land a man on the moon,” said Eddington. “That speech – referred to as President Kennedy’s moonshot speech – was intended to persuade the American people to ‘think big’ and support the national effort to land a man on the moon and return him safely to Earth. Our goal at the School of Pharmacy is to offer our faculty, students, and staff every opportunity to be innovators of their own and to move in a direction in which no other pharmacy school in the country has conceived. Pharmapreneurism is our moonshot.”

Eddington announced several new programs that will soon be implemented across the School to help foster an unparalleled environment that both values and nurtures pharmapreneurship among faculty and students alike, including:

To learn more about or discover ways that you can help support the School’s new pharmapreneurism initiative, please contact Ken Boyden, JD, EdD, associate dean for the Office of Development and Alumni Affairs, at (410) 706-3816 or kboyden@rx.umaryland.edu.

Calvin Knowlton, BScPharm, MDiv, PhD ’93, awarded honorary Doctor of Sciences in recognition of his decades of leadership in the fields of pharmacy, business, and philanthropy. 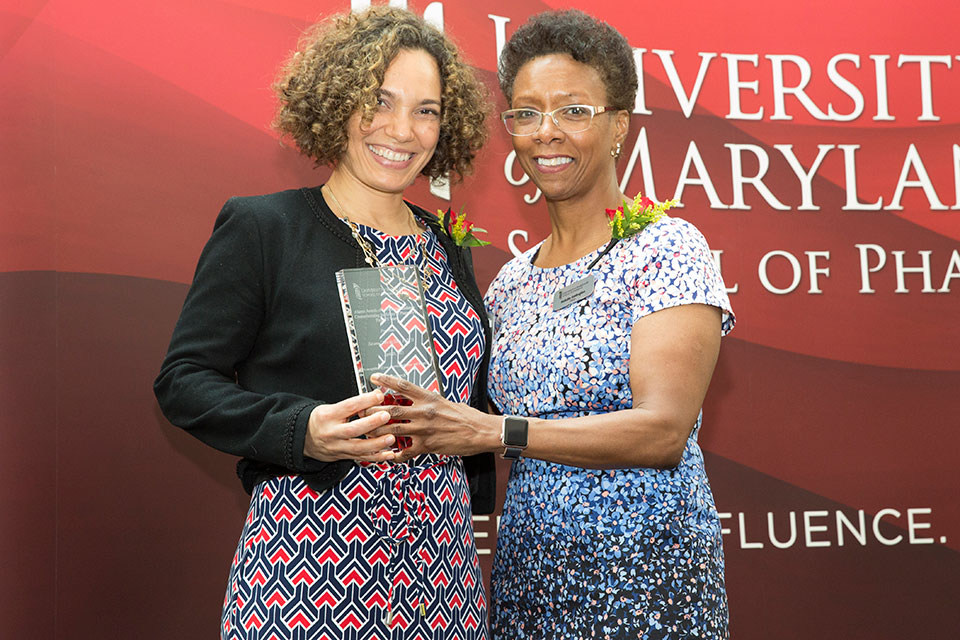 Event celebrates alumni who epitomize expertise, influence, and impact in education, research, practice, and community service and commemorates milestone anniversary for the School. 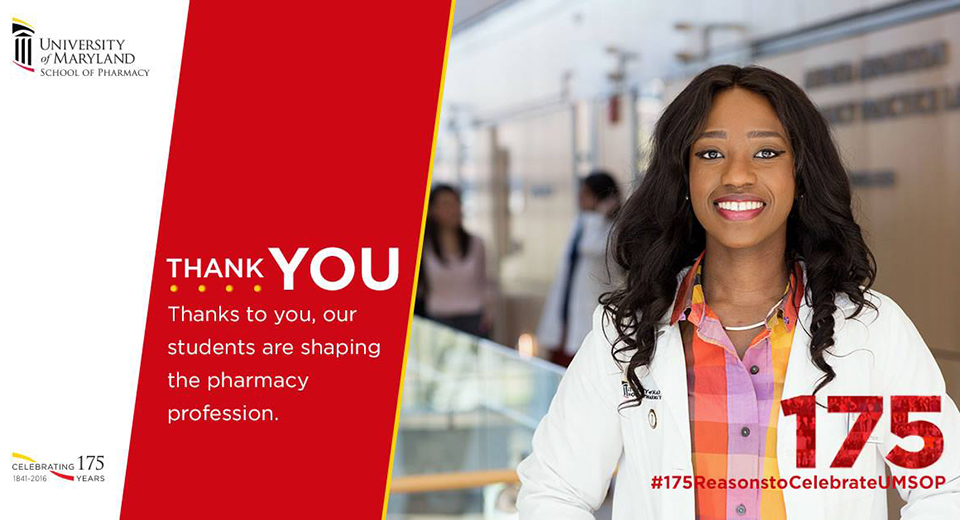