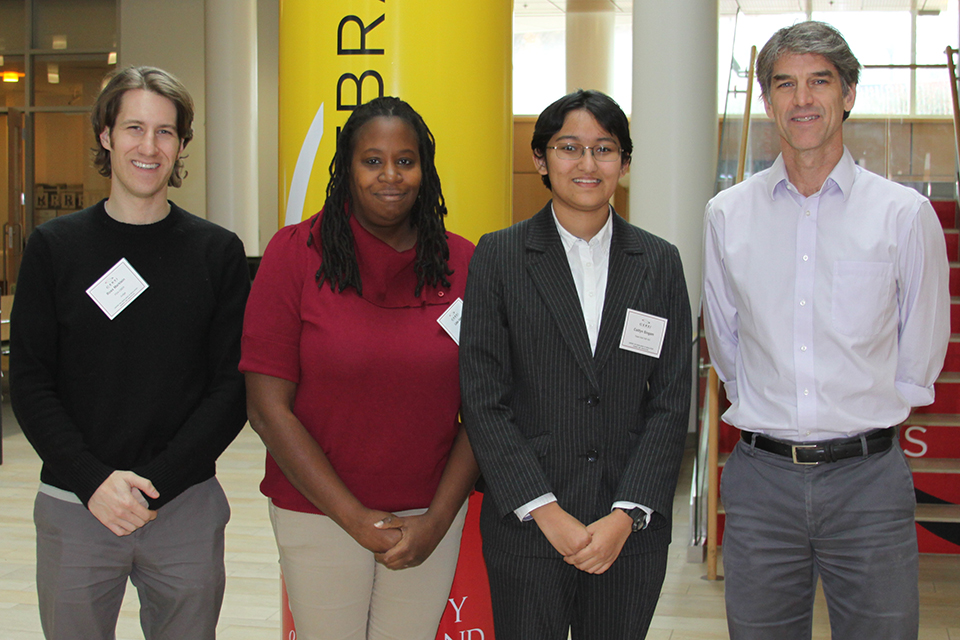 Imagine being the caregiver for a family member who has been diagnosed with a chronic illness, such as cancer. You review the labels for the medications prescribed to your family member and notice that one of the chemotherapy drugs has the word “cytotoxic” printed next to its name. You are not familiar with this word, but it appears in the same font size and color as the other information on the label, so you do not give it a second thought. According to Caitlyn Singam, a 17-year-old freshman at the University of Maryland, College Park and winner of the fifth annual “America’s Got Regulatory Science Talent” competition hosted by the University of Maryland’s Center of Excellence in Regulatory Science and Innovation (M-CERSI) at the University of Maryland School of Pharmacy on Jan. 27, what you do not know in this instance truly can hurt you.

“Hazardous drugs are becoming an increasingly large part of modern medicine,” said Singam. “However, the labels for these medications do not clearly convey the hazards associated with improper handling. If you do not know what the word ‘cytotoxic’ means, how can a drug manufacturer expect you to take the proper precautions to protect yourself when handling those medicines? Although this may seem like a minor oversight, it has the potential to cause a significant amount of damage.”

A hazardous drug is any drug that contains chemicals such as carcinogens or other toxic agents known to pose a danger to human health. The National Institute for Occupational Safety and Health maintains a list of more than 200 hazardous drugs currently available on the market, including medications used to treat cancer, some antiviral drugs, hormone agents, and bioengineered drugs. While in-depth information about the steps that individuals can take to protect themselves when handling these drugs is available in the drugs’ package insert, there is no visible warning on the packaging or label that clearly alerts individuals about the potential danger associated with the drugs.

“This problem is not limited to patients and their caregivers,” added Singam, who noted that nearly eight million health care workers might experience exposures to hazardous drugs in their workplaces. “There is an entire chain of personnel who come into contact with hazardous drugs, from the people who manufacture the drugs to the people who dispose of the drugs’ packaging. Many of these individuals, such as the drivers who transport the medications from the manufacturer to pharmacies or other health care facilities, may not have any knowledge about hazardous pharmaceuticals and the risks that they pose.”

To help individuals quickly identify hazardous drugs, Singam proposed implementing a universal labeling system that leverages components often found on other warning labels, such as the inverted triangle shape and bold yellow and red coloring. This label would appear directly on the medication’s packaging and trigger those individuals handling the medication to refer to the package insert for more information about important safety precautions to follow when handling the drug.

“The icon will be clearly visible on the label,” emphasized Singam. “It will stand out against the background and will be distinguishable from other markings on the packaging. In addition, because it will use icons instead of words, it will be universally understandable. You will not need to speak a specific language to understand that the medication poses a danger. The design will clearly indicate that you are at risk.”

She concluded, “By adding these labels to all hazardous drugs, we can make handling these medications safer for everyone.”

Judges Ross Marklein, PhD, staff fellow at the Food and Drug Administration (FDA); Paul Shapiro, PhD, professor and chair of the Department of Pharmaceutical Sciences (PSC) at the School of Pharmacy; and Lisa Jones, PhD, assistant professor in PSC, agreed with Singam, awarding her first place and the chance to meet with staff at the FDA to further discuss her proposal.

“This topic is one of my personal passions, and I am truly grateful for the opportunity to present my idea to judges from both the FDA and the School of Pharmacy,” said Singam, whose mother, Aki Singam, received her Doctor of Pharmacy (PharmD) from the School in 2001. “My parents were both surprised and proud that I took the initiative to develop this project and bring it to fruition. I hope that the School will continue to offer this competition and allow more students the opportunity to challenge themselves and further explore their own interests.”

Five teams competed in the talent competition this year, with second place awarded to the Biomarker Boys – a team of six student pharmacists who developed a new form that, once implemented, would help streamline communication between the FDA and drug sponsors during the approval process for biomarkers as surrogate endpoints in the Accelerated Approval Pathway. The form would also help improve access to relevant information for the health care professionals responsible for making decisions about drugs approved through the pathway.

“Our team was very grateful to have the opportunity to participate in this year’s competition,” said Fahim Faruque, third-year student pharmacist and team captain for the Biomarker Boys. “Before we began this project, I truly knew very little about biomarkers and the field of regulatory science. I have learned so much throughout this process and am excited to continue learning and taking steps to improve our idea for potential implementation in the future.”

New Generation Regulation – a team of four third-year student pharmacists – also presented their proposal advocating for the role of observational studies in the regulatory process, while Mycrobe – a team of two second-year medical students from the University of Maryland School of Medicine – presented their project to establish regulatory standards for the determination of commensalism in the vaginal microbiome and the Dreamers – a team of two third-year student pharmacists – detailed their plan to maximize patient safety by integrating virtual reality technology into pharmacy practice.

“When we established this competition five years ago, our goal was to provide more students with an opportunity to get involved and learn about regulatory science,” says James Polli, PhD, the Shangraw/Noxell Endowed Chair in Industrial Pharmacy and Pharmaceutics at the School and co-principal investigator for M-CERSI. “Not only have we accomplished that goal, but the student teams continue to astonish our judges with the tremendous effort that they put into their presentations, making for a very fun competition each year. The quality of the presentations delivered by our student pharmacists and biomedical students underscores the value that these future health care professionals will bring to regulatory agencies, including the FDA.” 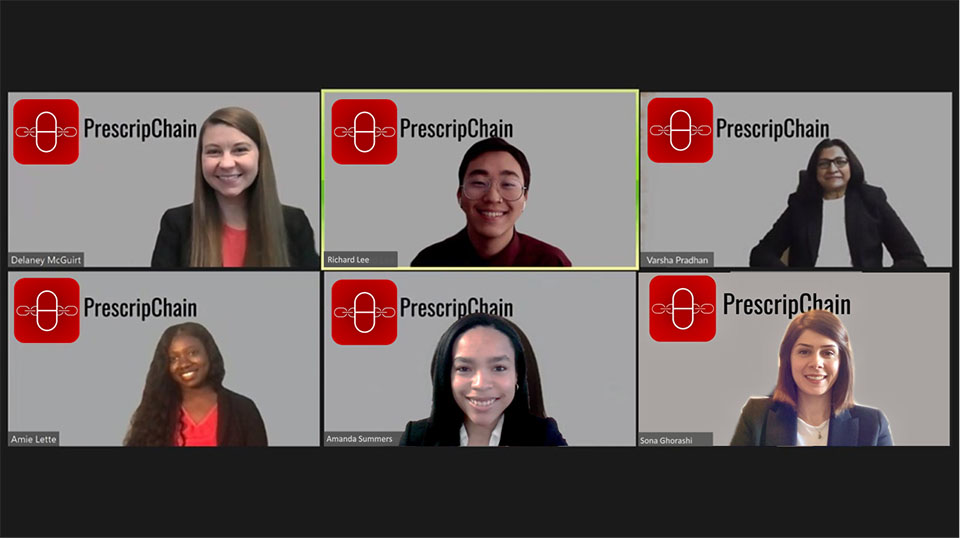 Second-year student pharmacists awarded first place in contest that aims to promote student interest in the field of regulatory science. 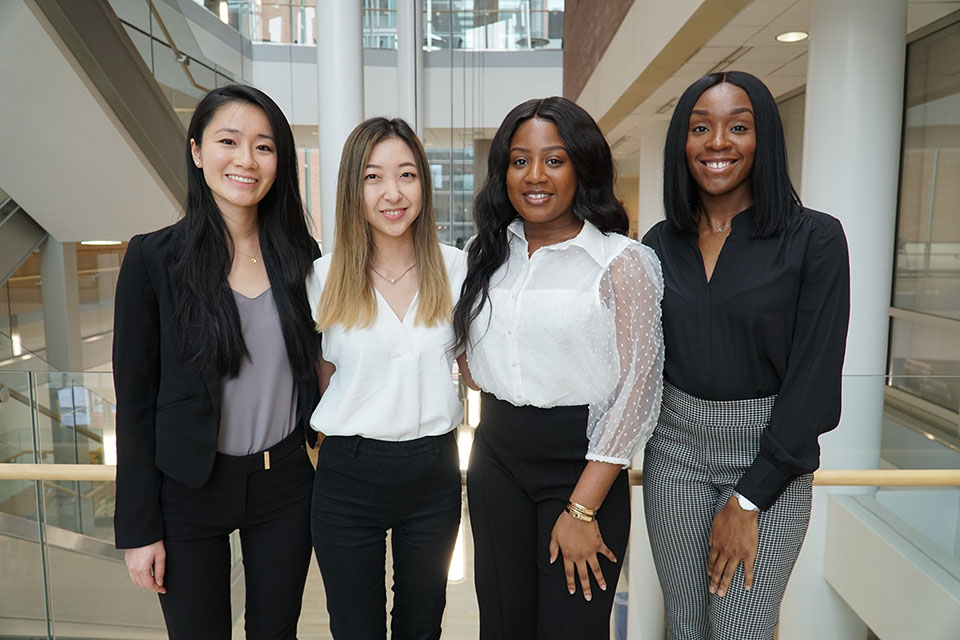 Team of second-year student pharmacists awarded first place in contest that aims to promote student interest in the field of regulatory science.