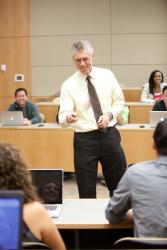 Robert Beardsley, RPh, PhD, has devoted his entire career to making pharmacists the best health care professionals they can be. In recognition of his outstanding leadership in the field, the Accreditation Council for Pharmacy Education (ACPE) has made Beardsley its top officer.

The ACPE is an autonomous agency that determines the accreditation of U.S. professional degree programs in pharmacy and providers of continuing pharmacy education. It elected Beardsley president of its ruling board of directors for 2012-2013.

Beardsley is a professor and vice chair for education in the Department of Pharmaceutical Health Services Research at the University of Maryland School of Pharmacy in Baltimore, where he instructs students in the social behavioral aspects of pharmacy, with topics ranging from patient counseling to care of the terminally ill.

For the past 15 years, Beardsley has taken part in ACPE’s evaluation site visits to various pharmacy schools nationwide. He says, “The visits are designed to improve the quality of programs by evaluating their strengths and weaknesses.” The visiting teams then make recommendations to the ACPE board for future action, such as to continue the school as is or to take some other action – from issuing warnings to calling for accreditation to be discontinued.

“We also reach out to the colleges, practicing pharmacists, and other stakeholders to determine what needs to be taught in the pharmacy programs,” Beardsley says. “This forms a baseline to which we hold schools accountable.” The process, says Beardsley, essentially means that the colleges and practitioners set the industry standards for pharmacy education. “The final product is stronger, which ensures we have competent pharmacists to betterserve patients.”

“ACPE’s work is vital to ensuring the quality and accountability of the educational programs offered at schools of pharmacy across the country,” says Natalie D. Eddington, PhD, FAAPS, FCP, professor and dean of the University of Maryland School of Pharmacy. “Dr. Beardsley, an esteemed member of our faculty, brings a wealth of expertise and experience in academic practice to this appointment which will be instrumental in addressing the changing landscape of pharmacy education. We are privileged to call him a colleague and celebrate this honor with him.”

Last year, Beardsley received the prestigious Robert K. Chalmers Distinguished Pharmacy Educator Award for national impact on the pharmacy profession from the American Association of Colleges of Pharmacy (AACP). At the School of Pharmacy, which U.S. News and World Report ranks as the ninth best in the nation, Beardsley helps develop innovative curricula and organizes strategic planning and training retreats for pharmacy instructors.

Beardsley’s career features a host of additional honors, including being recognized by the Maryland Pharmacists Association as both Mentor of the Year and Honorary President. He is past chair of the AACP’s Council of Deans and a former member of the group’s Board of Directors. He has received the Outstanding Teaching Award for the School of Pharmacy three times, and the University’s Martin Luther King Jr. Diversity Award.

He earned his pharmacy degree from Oregon State University and a Doctor of Philosophy in Pharmacy Administration from the University of Minnesota. He joined the University of Maryland School of Pharmacy in 1977 as an assistant professor and became a professor in 1994. He also served the School as associate dean for student affairs for 16 years.

Beardsley says he could not have been recognized as the new president of the ACPE without the support of his School colleagues and the lessons that they have taught him. As ACPE president, he will help “continue to improve the accreditation process and enhance how its 10-member board operates.”